Holiday parties tempt us with delicacies like deviled eggs, meatballs, and pigs in buttery croissant blankets. But each bite adds to the number of calories we consume and the subsequent swell of our waistlines. To avoid wintry weight woes and stay summertime fine, make homemade meals by substituting classic holiday pound-packers with healthier substitutes.

Deep-fried turkey is undoubtedly scrumptious, especially if you’re lucky enough to grab a leg before one of your greedy relatives. But, unfortunately, frying a relatively lean cut of meat is unhealthy. “You add a ton of calories and saturated fat,” says Skaneateles-based nutritional coach Kelly Springer.

Like turkey, Cornish hens are a lean source of protein; however, roasting the meat takes less prep work and less counter space than deep-frying. Additionally, you will save calories by avoiding your hen’s long oil bath. Celebrate Christmas in a health-conscious way by trying Epicurious’s modified recipe for Cornish hens. 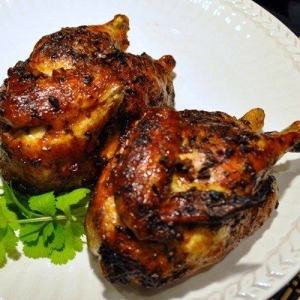 Recipe: Clean two Cornish hens by rinsing them under cold water and patting them dry with a paper towel. Preheat oven to 450°F. Sprinkle low-sodium salt and pepper over the meat and inside its cavities. Rub each hen with a half cup minced garlic and a tablespoon olive oil. Poke a few holes in hens and insert minced garlic and rosemary sprigs beneath the skin for a boost of flavor. Pour a half cup freshly-squeezed lemon juice over the hens and place a lime and lemon wedge inside of its cavities. Roast the meat for 20 minutes. Then, pour a quarter cup white wine and a quarter cup low-sodium chicken broth over each hen. Reduce oven heat to 325°F, and baste the meat with pan juices every 10 to 15 minutes. The hens will be done when the skin turns to a chestnut brown color.

Bread, seasoning, and butter make up our beloved classic stuffing. Loaded with carbohydrates, the turkey variety makes us want to nap. And eating too many refined carbs can lead to weight gain, according to the Harvard School of Public Health.

This recipe from PaleOMG consists of reduced carbs and more protein than traditional bread-based stuffings—so you’re likely to eat less.

Recipe: Preheat oven to 375°F. Cover a baking sheet with foil. Dice one sweet potato, disperse chunks on sheet and sprinkle with olive oil, salt, and pepper. Bake for 20 minutes, or until sweet potatoes are tender, then set aside. Set the stove to medium-heat and cook five strips of chopped turkey bacon in a skillet. When grease accumulates, add two chopped apples, five stalks of celery, and one yellow onion. When the onions begin to become translucent, add one pound of ground turkey sausage, one container of mushrooms, and two tablespoons of white wine vinegar. Sautée until turkey is almost completely cooked through. Once the sausage is done, add mixture to a bowl to cool. Add two beaten eggs to the sausage mixture, and add a third cup chicken broth along with sweet potatoes, one cup chopped pecans, and one cup dried cranberries. Place the mixture on a foil-lined baking sheet or in a 9×13 baking dish. Bake at 375°F for about 20 minutes, until everything is slightly browned.

If there were an award for the most succulent meat prepared during the holiday season, brisket would take gold. Springer, however, argues that brisket lacks nutritional value. “Brisket is one of the worst [meats]; it’s a really fatty cut,” she says.

Springer recommends tenderloin over any other meat because of its cut. “It’s packed with protein, B vitamins, and iron,” she says. Indulge in Allrecipes’s juicy roasted beef tenderloin recipe, ideal for prime-time festive feasts.

Recipe: In a medium bowl, whisk together ¼ cup olive oil, ¼ cup soy sauce, one tablespoon minced garlic, three tablespoons mustard, salt, and pepper. Place the tenderloin in a bag and pour in the marinate. Let sit in the refrigerator for at least one hour before cooking. Preheat the oven to 350°F. Transfer beef to a baking dish and pour marinade over the meat. Cook in oven until tenderloin has no pink in its center, 45 to 60 minutes.

Classic side: Latkes
Grease and potatoes go together like ketchup and mustard, which makes latkes a favorite side dish for many Jewish families. Myth bust: not all potatoes are bad. “In fact, all potatoes are good,” says Springer. “They’re loaded with vitamins, minerals, and fiber.” However, peanut oil—often used to fry potato cakes—adds more calories and saturated fats, which can increase levels of cholesterol in the blood, according to the American Heart Association.

“Sweet potatoes have more vitamin A than a regular potato, and they are loaded with potassium,” says Springer. Potassium is essential for important body functions, such as building muscles and controlling the electrical activity of your heart, according to the National Institutes of Health. To include healthier latkes on your holiday menu, replace a regular potato with a sweet potato and nix the frying. 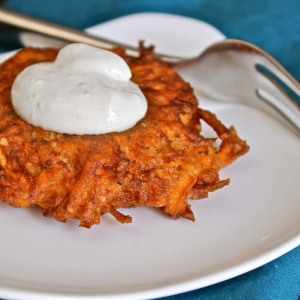 Recipe: After drying six finely-chopped sweet potatoes, mix them in a medium bowl with a large egg, a teaspoon of salt, and a little bit of cinnamon. Coat your baking pan with non-stick spray. Mold your latkes into the desired size, place them on the sheet, and bake at 400°F for approximately 20 minutes, or until golden brown.

Commonly, the salt from both meats is used to flavor collard greens. Springer explains that the nitrate and extra sodium used to cure the pork can lead to migraines and bloating—the usual side effects of a pork driven-meal.

Somewhat of a celebrity in recent years, kale doesn’t take as much time to prep and cook compared to collard greens. Plus, it doesn’t take much soaking and seasoning to strengthen the flavor of kale either. Cooking with turkey bacon adds a subtle amount of saltiness and bell peppers provide mild sweetness.

Recipe: Microwave or pan-fry turkey bacon before adding it to a pot of kale that has been simmering for 10 minutes. Throw in chopped bell peppers around the same time. Let the kale boil for two minutes before letting it simmer. Cover for 20 to 45 minutes, depending on how crispy you like your greens.

Classic side: Baked macaroni and cheese

No holiday should go by without this creamy, cheesy delight gracing the family table. This ultimate comfort food is also the ultimate calorie-packer. Made with cheese, eggs and milk, this baked casserole can weigh you down—literally.

Alternative side: Mac and cheese-less tossed in butternut squash purée

Lower in fat than dairy products, butternut squash delivers both rich flavor and nutritional benefits… Oh, and a much-needed holiday cleanse. High in fiber, winter squash will really get your bowels moving. By replacing heaps of cheese with a butternut squash purée, your creaminess cravings will still be satisfied. 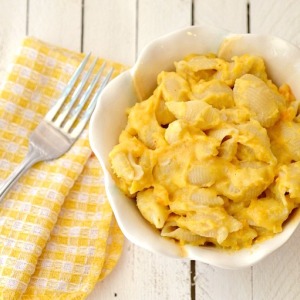 Recipe: Cook macaroni according to package directions. When al-dente, drain and set aside. Fill a medium-sized sauce pan with two cups of chicken broth and bring to boil on high-heat. Peel and cube half a medium-sized butternut squash and add chunks to chicken broth. Cook for seven minutes, or until fork-tender. Drain, but reserve half of the used broth. Scoop softened squash and remaining broth into a food processor. Add four tablespoons of maple syrup and a dash of cinnamon and blend until smooth. Pour purée over cooked pasta and mix until well coated. Add cheese, if desired. ●